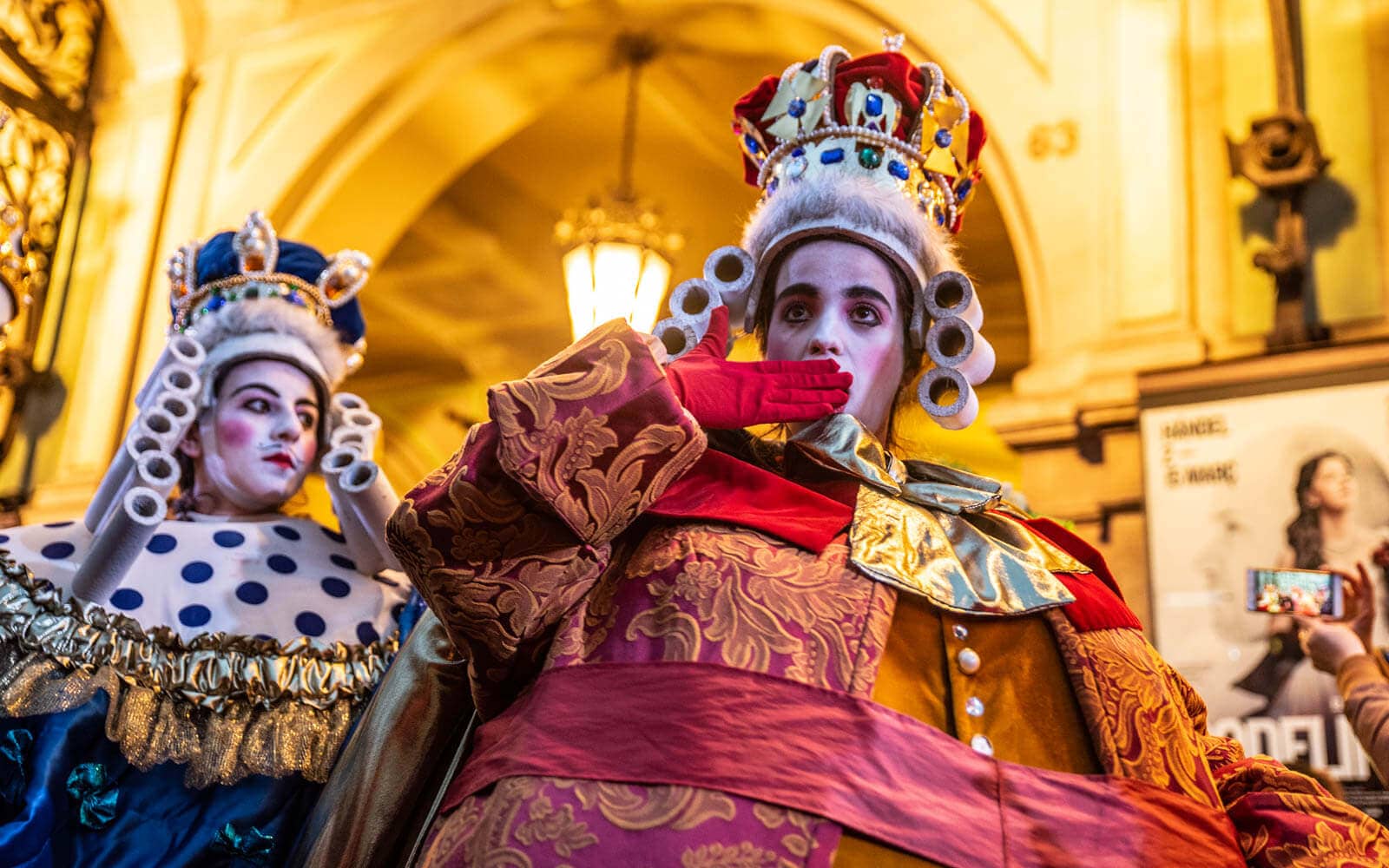 Couldn’t fit Brazil in this year? Maybe having a Barcelona Carnival is the next best thing.

Here’s how to visit and enjoy it to the fullest.

First off let me remind you that 25 minutes down the coast from Barcelona you’ll find the famous Sitges Carnival which is where most locals go to celebrate.

If you can find the time I suggest partying there too.

The dates and events for 2020 in Sitges have yet to be announced though you’ll find the list eventually on the official city website.

Aside from official events keep in mind also that carnival in Barcelona is more of an improvised party than anything else – you’ll bump into cool local events just walking around the Gothic Quarter.

Now let’s get started with an introduction to the city’s carnival characters.

Let’s start off with the king of Carnival!

Carnestoltes is a fictitious character, a type of local MC, who kicks off the celebrations and presides over all the events of Carnival Barcelona week.

This irreverent figure embodies the soul of the party and libertinage of the festival.

He’s played by an actor who gives satirical speech on the Thursday ‘opening ceremony’.

The kingdom of Carnestoltes does not reign for long however: on Shrove Tuesday the poor king is sentenced to death for his reprehensible qualities as a ruler.

The execution takes place on Ash Wednesday in a popular festival marking the beginning of Lent.

If there’s a king there’s gotta be a queen!

The Carnival queen is pretty much the female version of Carnestoltes, and takes a back seat to him even if its tradition is a few centuries older than that of the already known sovereign.

In the past, one of the focal points of the Carnival Barcelona was the election of the queen, but for some years now (for budgetary reasons) the event doesn’t take place anymore.

The Sardine Burial (Entierro de la Sardina) marks the end of the celebrations.

Generally the burial is accompanied by a massive meal (how can you miss anything?) and some dancing and singing.

It’s not exactly clear what the origins of this tradition are though some people interpret the burial in a phallic way – since the festivities die down and we give way to the purification rituals of Easter.

To give you an idea of ​​how Carnival in Barcelona works here’s a quick day-by-day run down.

Although the official calendar for 2020 hasn’t been released yet know that Fat Thursday is usually the day dedicated to gastronomy with its popular tapas and organized dinners.

On Saturdays is when you’ll find the parades in different Barcelona neighbourhoods.

Here’s the events I’d be planning on seeing:

As mentioned, Barcelona Carnival kicks off with the arrival of King Carnestoltes and his seven ambassadors who strut their stuff in a parade called the Pasacalle de los Siete Embajadores.

They’ll pass through the streets of the Gothic Quarter starting from La Rambla (at 6:00 pm in Plaça Reial) and go all the way down to Plaça Sant Jaume.

This year there’ll also be a stop at the La Boquería Market which is celebrating its 180th birthday.

At 6:45 pm the parade goes down Palau de la Virreina and finishes up with the famous Taronjada: a battle of orange confetti.

On Fat Thursday you should be eating the famous tortilla or botifarra d’ou (egg sausage).

If you’re really a big fan of Spanish tortillas you can also participate in the tortilla making contest organized by the Association of Catalan Culture Promotion.

There’s also another in Plaça Lesseps in Gracia at 11:00 am.

On the Friday the most popular parade is organized specifically for kids.

The petit carnavalassu parade starts every year from Plaça Sant Just at 5:15 pm and ends in Plaça de la Mercé at 6:15 pm with a percussion concert.

You’ll see Barcelona’s kids (and yours too if you dress them up!) dressed up in their favourite costumes, playing music, and throwing confetti.

Saturday is the most popular parade day throughout many different districts. This year there are more than forty scheduled and chances are there’s one near your hotel, apartment, or hostel.

If I had to pick one I’d go at 5:45 pm to see the parade organized by the stylish Eixample District (Dreta de l’Eixample) which starts from the Mercat de la Concepció.

As I mentioned before, Barcelona Carnival celebrations conclude on Ash Wednesday.

The major event here is the satirical ‘funeral’ of King Carnestoltes where the crowds bid goodbye to the controversial king: until his speech next year!

You can also go to the Burial of the Sardine in Barceloneta. The event starts at 5:45 pm at Plaça de la Barceloneta and continues along the beach, all being capped off with a ceremonial sardine BBQ/tasting at 7:00 pm.

One other thing: another important carnival in Catalonia is the Vilanova i la Geltrú Carnival. This  town close to Sitges parties as hard as any other place.

No time for parades or meals and wanna get some drinks and a dance in?

It’s suitable for all ages and until 5:00 pm you’ll find workshops and games for kids.

DJ Sidonie will be getting the dance floor moving – bring a costume!

This Barcelona costume shop has a local feel and is more of a Halloween and Carnival destination: the makeup and masks here are really something.

Its Donald Trump masks are a big seller.

This super-central novelty shop has everything from bacon to babies.

Throw in the customary blow up dolls, glow bracelets, and silly signs and you’ve got a one stop shop for all your ridiculousness needs. This is also perfect for Barcelona stag dos.

There are two more locations: Pintor Fortuny 6 and at the L’illa Diagonal shopping centre.

Get at Me in the Comments

That’s it for my Barcelona Carnival post but maybe I forgot something?

Make sure to write me in the comments below if you have any questions about anything Barcelona!

Finally, don’t be afraid to join the Carnival discussion by first giving me a like on Facebook and then joining my group I’m Off to Barcelona – here you can ask any questions, air out grievances, and chat with thousands of Barcelona travelers.