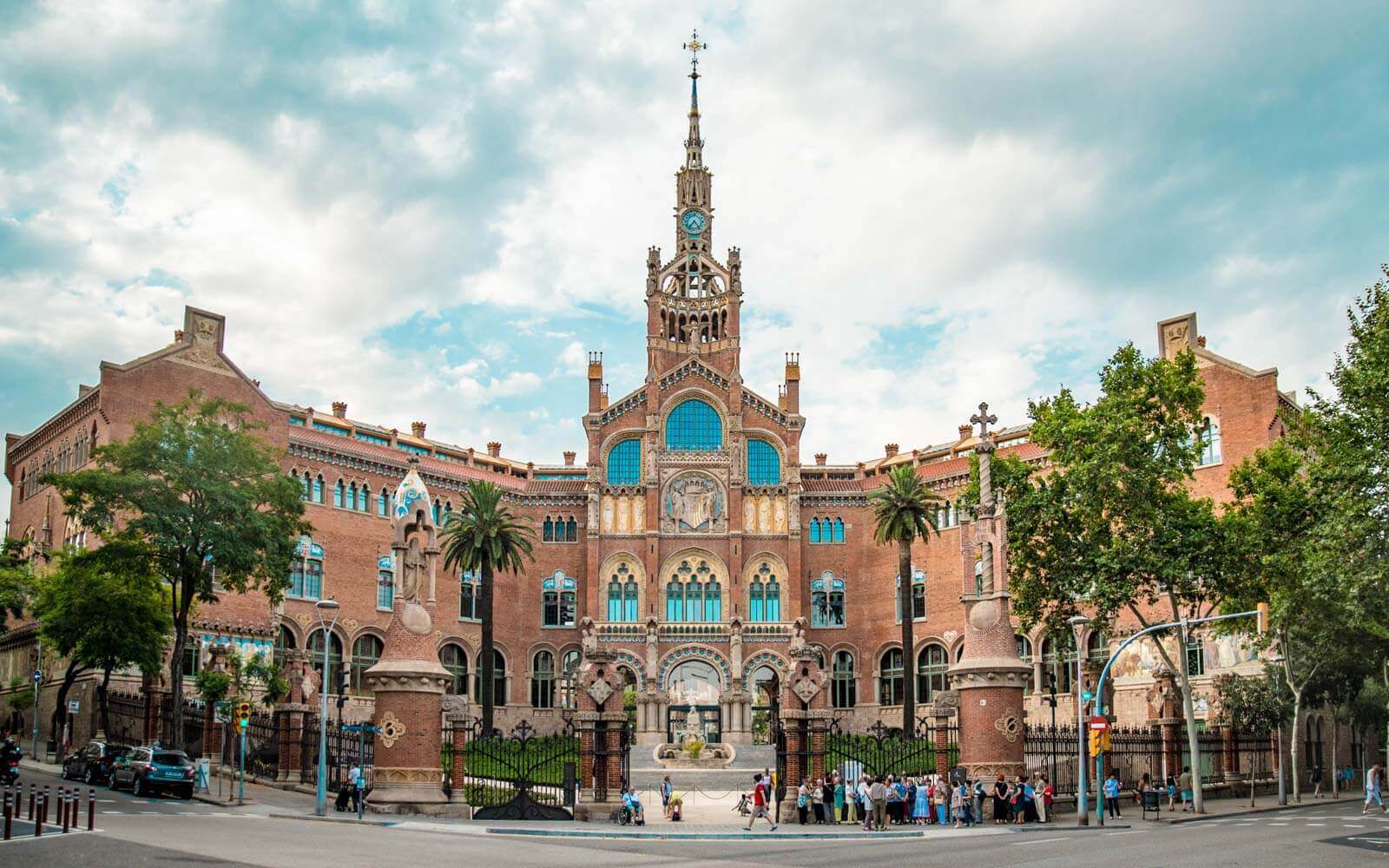 One of my favourite activities in Barcelona is hunting the city’s mesmerizing modernist buildings and the adjectives to describe them: majestic, morbid, eccentric, and how many more?

Today brings me to the Hospital de Sant Pau – the city’s old hospital and one of the most complex modernist buildings in all of Europe.

It’s here that light and art helped rehabilitate the sick – revolutionary stuff! This masterpiece of local architect legend Lluís Domènech i Montaner will transport you back in time.

And I’ve got the information on how to visit, ticket prices, opening times, and much more.

As mentioned it was the masterpiece of local Catalan architect Lluís Domènech i Montaner – the brains behind other such amazing Barcelona attractions like the music lover’s dream Palau de la Musica.

Other than local genius architect Antoni Gaudi there’s probably no bigger player in the game.

Domènech i Montaner envisioned Sant Pau Hospital as an urban garden with a modern village: streets, pavilions, and even a church and convent. All would be connected via underground passageways so as not to upset the complex’s aesthetic harmony.

The area is just an explosion of colour and ornamentation – a true feast for the eyes which begs the question… why can’t all medical facilities be like this?

The Hospital de Sant Pau was built on the foundations of an old religious hospital dating back to the end of the 800’s. In all the hospital was really the convergence of 6 small medieval hospitals and was officially founded in 1401.

As Barcelona became the industrial engine of Catalonia the city’s growth called for a new hospital, and the area called Guinardó (at the time isolated from the rest of the city) was perfect for its slight elevation – and distance from the densest parts of the city during epidemics.

It was the queen’s banker Pau Gil who donated a considerable fortune upon his death in 1896 that allowed the city to move ahead with its new modernist hospital. Domènech i Montaner was put in charge.

Even though construction started in 1905 it was not inaugurated until 1930 due to a lack of funds and problems with the local bishop – out of the 48 pavilions envisioned only 27 were built.

The Recinte Modernista stopped being a functional hospital in 2009.

The complex that we enjoy today is the result of some amazing restoration works in the past years that have given us an amazing museum and cultural centre.

And even though Barcelona is rich in modernist attractions like Casa Batllo and La Pedrera it’s still worth a visit.

What to See at Recinte Modernista de Sant Pau

You might get so lost in the beauty that you’ll forget about the doctors and think the artistry of the complex itself were able to cure the sick!

The visit starts in the massive main courtyard which consists of two large v-shaped buildings that almost form arms to welcome patients to the hospital.

The symmetrical complex surrounds two streets that run north to south and east to west.

On every side you’ll find different buildings dedicated to different fields of medicine, all isolated from each other and with one or even two basements to prevent the spread of disease.

The connection between the various buildings of Sant Pau Recinte Modernista is via a series of underground tunnels which are partially open to visitors.

Inside you also get two huge gardens intended for growing flowers and purifying the air.

It is said that Domènech i Montaner was more interested in the beauty of the complex than its functionality as a hospital and as such undervalued many structural questions: for this reason many of the buildings, like the patients, had to be stabilized.

Any thorough visit includes seeing the three major buildings of which you’ll come across surgical theaters, recovery wards, and more.

The Pabellón de Sant Salvador is a reconstruction of the hospital’s history as the Hospital de la Santa Creu i Sant Pau – from its creation in 1401 to its closure in 2009.

On the top floor you’ll find an exhibit which symbolizes a dragon and pays homage to the life and works of Lluís Domènech i Montaner.

From here you’ll head on to the external spaces where you truly see Montaner’s city-garden vision on full display. There’s no better place than here to admire the exterior beauty of the buildings.

You’ll also see the Pabellón de Sant Rafael which has been restored almost exactly as it was when it was a fully-functioning hospital in the 1920’s.

Here you’ll get tons of information on how the hospital operated, the types of medicine practiced here, and how citizens lived in Barcelona at the beginning of last century.

It’s then on through the underground tunnels that you’ll end up at the Pabellón de la Administración – the administration wing of the hospital that displays some of the building’s most impressive decoration.

Once you’re out on the atrium make sure to soak in the incredible panorama (comparable perhaps only to Park Guell) of the Sagrada Familia, which is reachable on foot just 10 minutes down the famous Avinguda Gaudí.

Like most of your Barcelona itinerary you’ll be able to buy tickets at ticket windows, however if you do it this way you run the risk of having to stand in line.

My suggestion is always to buy skip the line tickets in advance online via ticket giant Ticketbar.

Those Barcelona travelers with disabilities of 65% or higher or a degree of dependency of 3 also go free with a companion.

There is also a 20% discount for the Recinte Modernista using the (almost) all-inclusive tourist discount pass called the Barcelona Card.

Those interested in booking groups need to email visites.recinte@santpau.cat.

You can also get a full guided tour accompanied by a licensed guide.

They will explain the history of the Recinte Modernista de Sant Pau, go in depth into the building’s unique and artsy characteristics, and its evolution with the city of Barcelona.

The guided tour of the Hospital de Sant Pau lasts an hour and a half.

FYI: guided tours are not available on free entrance days (listed above).

How to Get to Hospital de Sant Pau

While it isn’t one of the city’s best neighbourhoods to stay for tourists the Guinardò neighbourhood is served by a fairly convenient metro station from the centre: Sant Pau – Dos de Maig (blue line L5).

Due to its proximity to the city’s most popular attraction (the Sagrada Familia) most people simply take the 10 minute walk from there. Combining visits to these two titans in the same day is recommended.

Numbers 19 and 47 pass through the city’s centre: Plaça Catalunya.

Allow Me to Cure Your Ills

Yes, it’s always possible I may have missed something in this article.

So tell me – what else do you need to know about visiting this amazing hospital, and how else can I help you along your way in my adopted home?

Please be in touch in the comments below 🙂