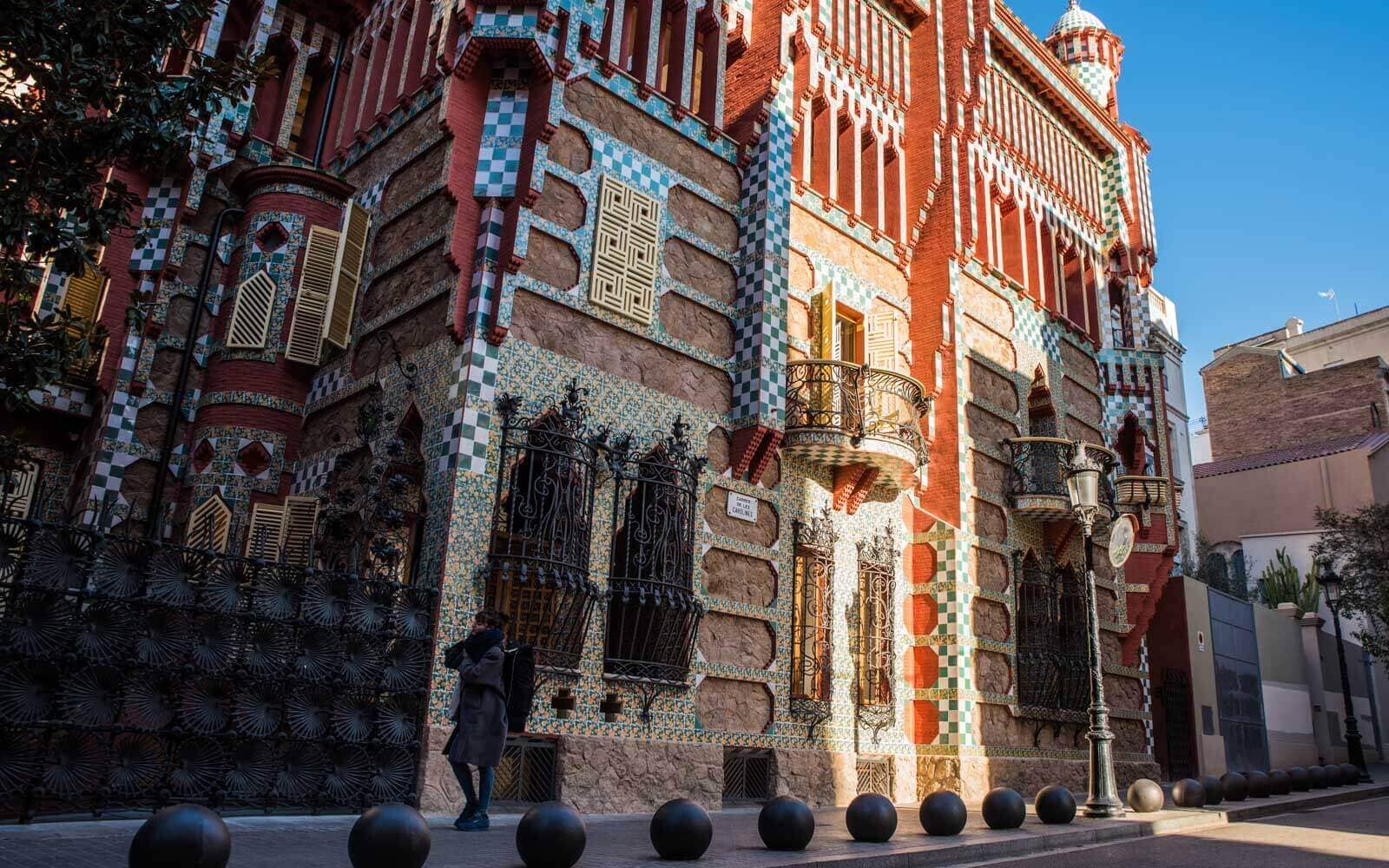 This is Casa Vicens.

The first and least known Antoni Gaudi building is this extravagant house – that from 1888 until the 15th of November 2017 was completely closed to visitors.

But now? You can see it and it starts with my Casa Vicens visiting guide below.

Ready to get the visit going already? Get your tickets clicking the blue button below:

CASA VICENS€2.00 off per ticket

The History of Casa Vicens

Hotshot stockbroker Manuel Vicens i Montaner is keen on constructing a magnificent ‘summer chalet’ between the the neighbourhood of Gracia and nearby Sant Gervasi, two neighbourhoods in constant expansion.

He hires Gaudi, who aims to honour the figures and contemporary styles of the moment using traditional Catalan building methods as a base.

With a few decorative and symbolic elements that the world had never seen before.

The result? A fairy tale in building form.

We notice Gaudi’s genial madness immediately in the imposing facade full of natural elements, carvings, and painted tiles. The interior displays many exotic influences, polychromes, and a massive garden.

The house would eventually pass into the hands of the Herrero-Jover family for more than 100 years. In 2005 it was declared a UNESCO Heritage Site – and the last of the city’s 8 buildings with this distinction to open to the public.

Today? It’s finally open to us!

To start off, let’s imagine what awaits us at a Casa Vicens visit through our ‘virtual tour’ of the various house spaces.

The house is divided into three levels: the ground floor, the first floor, and the second floor.

Included in all of this is its lush garden (which originally included plans for a waterfall), a circular fountain, and a panoramic space that’s full of typical plants of the era.

The ‘noble’ floor is where you find all the main decorative elements and ornaments.

The ground floor of Casa Vicens is comprised of three different spaces: the living room, the veranda, and the smoking room.

The living room and its dining space have oriental vibes and a garden motif. The three dimensional figures of fruit, birds, flowers, and vines were created by Gaudi using pressed cardboard.

You’ll look up at the dome painting from the living room and feel as if you’re looking into the sky.

The semi-open veranda is connected to the living room, letting in tons of necessary sun to light up the room. From here you’ll be able to contemplate nature through its garden view.

On this floor you’ll discover how the residents of Casa Vicens lived.

The two bedrooms, one bathroom, and small living room of this floor are characterized by plant-like decorations full of symbolism exploding out of the walls. For any lover of Gaudi you’ll see this as a sneak preview to stuff like Casa Batllo.

Here you’ll also get a second terrace with a wooden bench and another view of the garden.

Clear, spacious, and harmonious: this was the space given to the workers of the mansion.

Here you can admire the light play created by numerous windows and the rooftop terrace with its exposed wooden beams. The second floor is also home to the Casa Vicens permanent collection, which gives a great overview of the house.

On the first two levels of Gaudi’s Casa Vicens the ceramic tile roles run horizontally. They’re decorated with French marigolds, a flower that grew naturally on the spot the building was constructed on.

Further up the emblematic blue, orange, and green tiles lose their floral motif and switch to vertical. You’ll notice a couple cherub-like characters on the balcony overlooking the street.

The curves of the building edges were to avoid the drabness that defined classical architecture.

In what can only be seen as the precursor to the rooftop terrace heaven at La Pedrera, this rooftop accessible to the entire house is famous for its four-side walkway, pitched roof, and water-collecting curved terracotta tiling.

Look for the small cupola on the west side of the building.

You’ll also notice the green and white ceramic chimney caps, an ode to Gaudi’s love of Asian and Islamic styles.

On the 22nd of May is Saint Rita Day, where Casa Vicens will organize special activities to honour the “saint of the impossible”.

Why exactly? Because of the fountain dedicated to her in the back garden. For years Casa Vicens was only open to the public on the this day and people would pass by to drink water from the fountain, believing it to have curative properties.

Antoni Gaudi’s Casa Vicens also hosts a permanent exhibition that will explain the history of the house, its primary function as Gaudi’s architectural manifesto, and the social, cultural, and artistic movements of the time.

The first exhibition promises to be a grand expose on modernism in general and an ode to Gaudi’s contemporaries in the architecture world. Over the years it is anticipated that new decorations and furniture will be added by various invited artists.

You also wouldn’t be able to complete the visit without full gift shop, book shop, a garden bar, and coat check.

With general admission tickets the visit is done independently.

As there are no time slots you can stay as long as you want for the visit, though generally all you’ll need is 60-90 minutes to do it thoroughly.

Maps are given and members of staff are on hand on every floor for explanations.

Here you get the lowest prices while at no extra cost to you earning me a small commission to cover the expenses and time I put in… if you think I’ve helped please reserve using the blue button below.

CASA VICENS€2.00 off per ticket

Once bought simply show the tickets on your smart phone after downloading the pdf.

Looking for free general entry? Your Casa Vicens visit is free of charge during European Night of the Museums (May 20th) and International Museum Day (May 18th).

If you’re looking for a guided tour of Casa Vicens they are available in English, Catalan, Spanish, or French. The English tour typically runs twice a day (at 10:00 am and 2:30 pm) and is capped out at 10 people.

It’s not only a great way to discover the house but learn about Gaudi’s approach in general.

Guided tour tickets are best bought in advance from the official Casa Vicens website. Make sure you show up 15 minutes before your time slot to avoid lining up.

Groups of 10 or more people can organize a tour by contacting reserves@casavicens.org.

In 2019 the hottest new product online for Gaudi lovers is the ticket package that allows you to skip the lines and see all three of Gaudi’s famous Barcelona mansions:

You can buy this package (with a €4.00 discount) by clicking the blue button below.

The house is open daily aside from a select few holidays.

How to Get to Casa Vicens

Write Me for More Info

If you didn’t get enough information on Casa Vicens or are still in the dark on something regarding your Barcelona holiday, remember that you can write me in the comments below for custom advice.

Also, any comments to help make the blog better would be greatly appreciated.