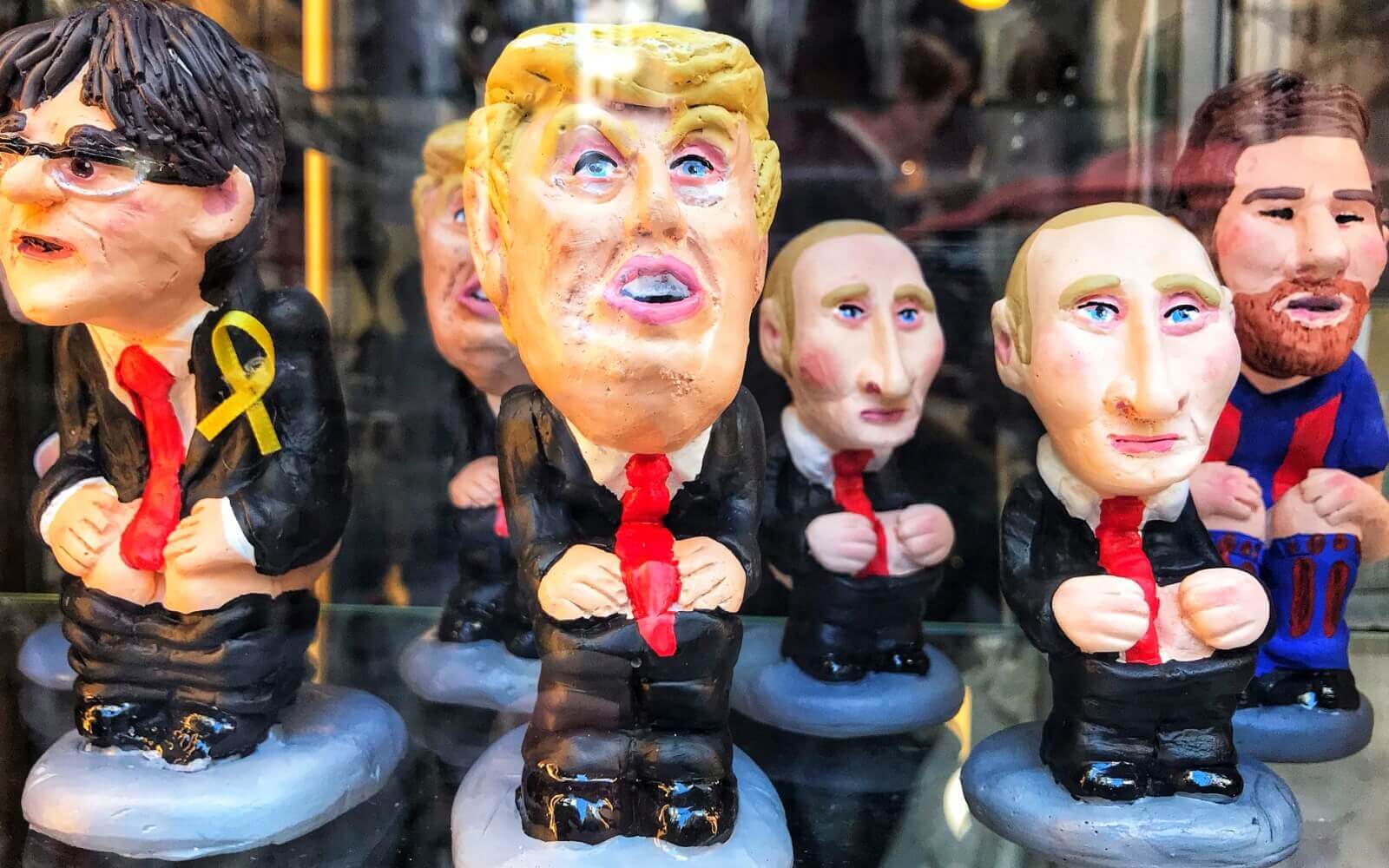 So many readers ask me about Barcelona souvenirs.

My response is usually some combination of sandals, wine drinking devices, and naughty nativity scene intruders.

And food – lots of food.

Let’s leap into the lunacy together and get those Barcelona gifts sorted.

If you had something else in mind while shopping please let me know in the comments below.

Also, make sure you read all the way to my Barcelona souvenir map to find the proper shops with ease. I’ll also be listing a few generic Barcelona gift shops there.

In the meantime, I suggest starting with:

Wine lovers looking for that Barney Gumble ‘just hook it to my veins’ moment are in luck.

This half wine bottle/half watering can is held high above one’s head before pouring a steady stream of wine into the mouth.

It looks reckless but it’s really just the perfect amount.

Spaniards use it for communal drinking exploits as it’s seen as hygienic and inclusive. What do I think? I think you’ll have a lot less dishes to wash and a great dinner party trick back home.

You can get them for less than €10.00 at El Corte Ingles in Plaça Catalunya.

Your Own Personal Gaudi Lizard

When visiting Park Guell it takes ages to get a pic with this colourful and emblematic mosaic lizard, so why not put one in your suitcase and have it for a lifetime?

Though referred to as a lizard or salamander its name in Catalan (‘El Drac‘) tells us it’s actually a dragon. Gaudi made his using the broken-tile trencadis style.

It was made in homage to the dragon’s place in Catalan folklore.

You can grab keychains and magnet versions at the gift shops of Casa Batllo or La Pedrera.

The name caganer is loosely translated as ‘the shitter’ and it’s not by accident. These peculiar mini ceramic dolls (photo above) are sat in a rather compromising position – doing a numero dos.

Believe it or not they’re added to nativity scenes in Catalunya.

Why? So that the new year can be ‘fertilized’ for new growth.

Even in spring there are plenty of shops in the Gothic Quarter with your favourite historical and contemporary characters from Trump to Messi to the Pope.

These make a great gag gift.

For me the best souvenirs from Barcelona end up in your stomach – so let’s start here.

This southern European confection made of sugar, egg whites and toasted almonds is known around our parts as nougat: a crunchy candy-like slab hard enough to be a weapon.

The reason I suggest going for this as a Barcelona gift is because the local torró d’Agramunt takes nougat to a whole new quality level.

The high almond concentration by law must be between 46% and 60%. This means way less of the sticky, less tasty egg white paste and more flavour-town residence for you.

Any self-respecting tourist will spend at least one night eating Barcelona’s best paella.

This traditional Spanish rice dish is also surprisingly easy to make at home. So pick out your own pan and get down to it. All you need to do is consider the size/portions and material.

The traditional carbon steel ones conduct heat the best and it’s how they do it in Valencia.

Whether it’s used for cooking or drizzled over classic Barcelona dishes like pan amb tomaquet you’ll hardly take a bite at any of the city’s top restaurants without it.

When shopping for this liquid gold souvenir my restaurateur friend recommends the grassy, neutral, low acidity (his words, not mine!) O-Med Arbequina Extra Virgin Olive Oil.

It’ll cost you €17.50 for a liter at El Corte Ingles in Plaça Catalunya.

For people outside Spain vermouth is a seldom used additive to cocktails like manhattans.

But here we drink it neat – and often.

The fortified wine common in Barcelona’s bars is infused with all sorts of spices and botanicals like cinnamon and chamomile. And some of the best brands in the world are in Barcelona.

Consider this the family version of caganer.

At the aptly called Duck Store you’ll find rubber duckies of all sorts – dressed as any animal, historical figure, sport, country, holiday, emotion, or whatever else you can dream up! There are hundreds.

All of them are hand painted, made from natural latex, and completely eco friendly.

My favourite is the glow in the dark ‘Ducktrix’ based on the Matrix films.

Let’s scrap the supermarkets and get to the Catalan creme de la creme.

Conservas (preserves) here are more than opening a can of tuna to make a sandwich in a bind. Here you’ll get top quality seafood products like white Galician clams, Cantabrian anchovies, tuna, Catalan caviar, mussels, and more.

Head to Colmado Quilez in Eixample for this plus great wine pairings, vinegar, ham, cheeses, whiskey, and anything else Spanish and delicious.

These traditional sandals originating in nearby Menorca were worn for their combination of durability and comfort while working outside.

Today they’re in fashion with movie stars, singers, and even the royal family.

The leather uppers are complimented by a flexible rubber sole which was traditionally made from car tires, though now a more lightweight rubber material is employed.

Look for the ‘Avarca de Menorca’ label for government-guaranteed quality.

The most stylish collections in the city are at Barcelona Handmade.

Whether we’re talking about former residents Gaudi, Picasso, Dali, Miro, or countless others there’s something colourfully crafty about Barcelona.

We see it in its pottery traditions owing to top quality clay near the French border.

The terracotta tiles, jugs, flowerpots, and even piggy banks made mano a mano (one by one) make a great original Barcelona souvenir of enduring quality.

You’ll get some decent product in the city but to cut costs, discover the real Catalunya, and have a nice day trip outside of the city the town of La Bisbal d’Empordà (near Girona) is the best spot.

In Barcelona I’d go to Itacas.

This luxurious gold-tinged food, medicine, and dye was introduced to the Iberian Peninsula in the 9th century and by the 14th century Catalonia was one of the world’s biggest producers.

But don’t grab it at the famous Boqueria Market!

The cooperative Safrà de les Garriges (in nearby Lleida), known for its alkaline soils and low humidity, sends their small batch saffron to oil shop Olisal in the Gracia neighbourhood.

Here you can also get some great little gift packs and even aphrodisiac oils.

If you’re visiting over Christmas this is one of the top souvenirs in Barcelona.

Caga Tió (“Shitting Log”) is a Christmas tradition found in many Catalan homes, the equivalent of Santa Claus in log form. Children keep him warm and feed him in the days before Christmas… the log is repeatedly replaced with a bigger one as time passes.

Then on Christmas kids beat the fattened up Caga Tió with sticks so he defecates presents.

Get yours at the Fira Santa Llucia (Nov 30-Dec 23) outside the Barcelona Cathedral.

This crisp Catalan sparkling white wine originates in nearby Penedes.

Anybody who isn’t one of those pretentious sommelier types will hardly notice a difference in quality between this and champagne – except its lightness, lower acidity, and much lower price.

For a boutique brand from a 16th century winery I’d recommend Nadal or the classic and luxurious Anna de Codorniu.

Both can be bought a stone’s throw from La Rambla at Lafuente – Colmado Quílez.

Yes, you can wear a piece of the glory by getting yourself one of the world’s most recognized jerseys – just make sure you’re not swallowed up in the tourist traps.

The knock-offs will literally unravel in the wash.

For the real deal head to the FC Barcelona shops: the most central is at Carrer de Jaume I.

In a city with so much Spanish fluff like bull testicle silhouette shirts and even cheesy mexican sombreros it’s hard to find that basic local local souvenir.

Depending on who you talk to the four red stripes on the flag may be blood stains left on a shield by a local count, or even by Saint George (San Jordi) after defeating a mythical dragon.

Either way, there’s no greater symbol of the region we find ourselves in than this flag. When complimented with a blue star it means you support the independence movement.

You’ll hardly find a Barcelona souvenir shop without them.

I don’t normally recommend diving into a place with ailes of low quality and cheesy products, but for more generic souvenirs and ‘one stop shopping’ there are a few places to consider:

If you’re looking for souvenir central there’s also the option to get to Jaume I metro station and walk along a street called Baixada de la Llibreteria.

Just make sure you don’t get them at the airport!

When considering where to buy souvenirs in Barcelona look no further than my map!

Questions about how to get to any of the places?

Get at me in the comments below.

I’ve given my all in getting you a list of Barcelona souvenirs for your holiday – but maybe I missed something? Get at me in the comments below for clarification or custom advice.

And don’t be afraid to give me some Barcelona gifts by first liking the page on Facebook and then joining my group I’m Off to Barcelona – here you can ask any questions, air out grievances, and chat with thousands of Barcelona travelers just like you.