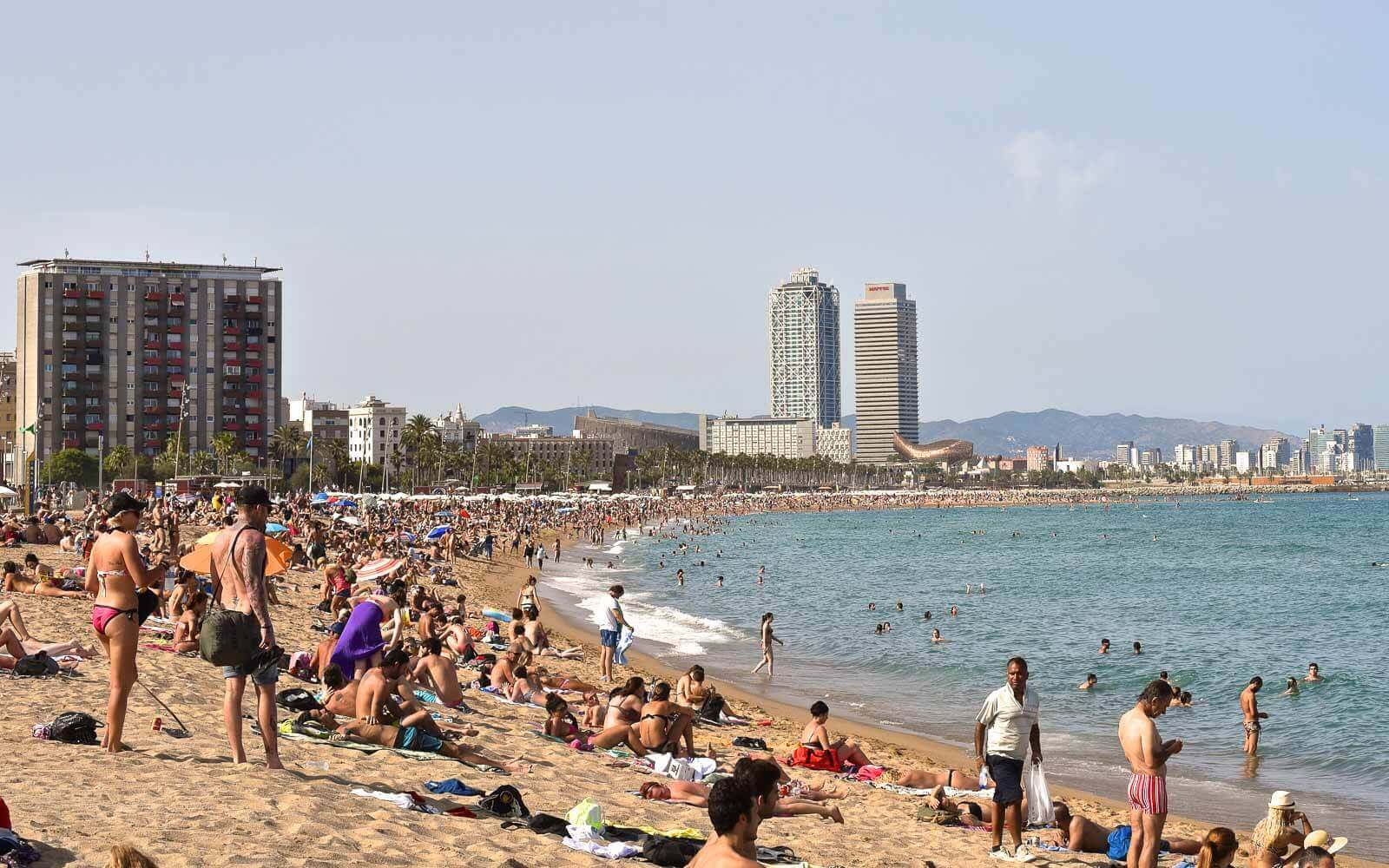 By the time we get to June in Barcelona the first beach swim is already in the rear view mirror.

The lazy days of ice cold beer and scolding hot sun are in full swing for us locals; but what about you travelers with pre-departure nerves and incomplete itineraries?

The good news is it’s a great month to visit; the even better news is that I’ve created the ultimate guide to get you through a sassy sojourn in one of Europe’s classic holiday destinations.

Welcome to Barcelona in June.

Why Barcelona in June?

It goes without saying that there’s year-round fun in Barcelona.

Putting tourist crowds aside though, I’m not sure there’s anything better than sipping an ice-cold beer while the sun caresses you two shades darker with a view of the Med at one of Barcelona’s best beaches.

It’s the energy in the city: the squares filled with locals laughing over olives and vermouth, the high-elevation picnics with a view, and the club nights risen to a different level of epic.

Then throw in Spain’s biggest party and some of the year’s biggest music festivals and arguably the best time for day trips outside the city.

You couldn’t have picked a better month.

Advice Before You Go

Remember that June is high season – and in Barcelona that means really high.

Lines for some of Barcelona’s biggest attractions are huge: make sure you buy your tickets in advance online so you skip the lines and also get up to a 15% discount on tickets.

For a great June holiday make sure you find the best area to stay in Barcelona for your needs whether you’re looking for a hostel or holiday apartment.

I also suggest the Secrets of the Old City walking tour on day one: the education will really enhance all your later endeavors.

Also make sure you get an all-inclusive discount transport pass to save money and time.

To maximize your sun time, see way more of the city, and burn off all those tapas calories you should also consider renting a bike.

The Most Popular Discount Card

For any half-decent itinerary people go for the Barcelona City Pass.

First off, it allows you to book everything online. It’s also a god-send letting you skip the long and sweltering June lines at La Sagrada Familia and Park Guell, get the best airport transport (with WiFi!) at Aerobus, and have 20% discount codes to pretty much everything.

More info clicking the banner below:

Packing for the Weather

Weather in Barcelona in June is about warm weather and sun.

I suggest you pack light: flip flops, t-shirts, shorts, a light jacket, and one nice outfit if you’re looking to hit one of Barcelona’s best clubs or have a classy dinner at any of the city’s best restaurants.

Festivals in Barcelona in June 2020

The first edition played to 8,000 people in 2001 at the famous Poble Espanyol but it quickly outgrew its old home and now finds itself by the sea at the Parc del Fòrum. Over 190,000 people attended last year.

Fans of electronic music should already know about this behemoth festival.

It was started in 1994 as a three-day electronic and advanced music festival and has grown exponentially from its humble beginnings: with 115,000 attendees from 101 countries in 2016.

Sonar 2020 is the 27th anniversary of the festival and some artists on the bill include: 2manydjs, Chemical Brothers, Carl Cox, Laurent Garnier, Richie Hawtin, and more.

A classic refuge for those not looking to spend a ton but want to dance all the same.

You’ll find Off Sonar events running over the duration of Sonar (June 18-20) – a lot of the DJ’s playing major bills during the festival end up playing small clubs and after parties often announced on short notice.

Among the Off Sonar events for 2020 keep an eye out for one the parties organized at the Monasterio/Poble Espanyol called Detroit Love (July 19th from 4:00 pm to 1:00 am).

There are seven parties in total (some TBA) which can be found here.

Barcelona’s biggest club, the famous Razzmatazz, is one of the best host venues up to the task and their 2016 offering of Boys Noize and Nic Fanciulli went down as the club night of the year.

Also check out the schedule at Terrrazza for more club options.

What to do in Barcelona in June? Locals swear by this Sunday afternoon electro-party picnic.

Take a quiet weekend afternoon in the sun on Barcelona’s historic Montjuic hill, set up some speakers and beer tents, and get at it. This outdoor party hosts international DJ’s, great gastronomy, and a large picnic area.

The festival goes at the famous Poble Espanyol: you can arrive using the funicular at Paral-lel metro station or by taking bus 150 from Plaça Espanya.

2020 also brings the first Brunch on the Beach! It goes down June 17th.

More Brunch in the Park information.

One’s of Europe’s most liberal cities wouldn’t skip out on all the fun, would it?

Last year over 200,000 people both gay and straight attended the many festivities: funfairs, an open-air foam party, concerts with international DJs, drag queen galas and more.

For more information on gay clubs see my article here.

Still don’t know what to do in Barcelona in June? You’re probably beyond hope if you don’t like this:

Spain’s biggest outdoor party is held on the night of June 23rd 2020.

The Bonfires of Saint John (Las Hogueras de San Juan) have their roots in summer solstice traditions of ancient times – fires were lit to defend against evil spirits believed to roam freely as the sun turned southward again.

Today these bonfires have found their way to the beach and transformed into all sorts of firecrackers and mischievousness. Hundreds of thousands end up on Barcelona’s beaches and it’s not uncommon to party all night.

People young and old hold some version of a botellon: a type of street drinking party where everybody brings bottles of spirits, ice, mixers, plastic cups, and lemon to drink the summer in!

From the beach you’ll see firework displays until sunrise, the chiringuitos (beach bars) stay open forever, and you’ll be sure to meet a ton of people and maybe even take a night swim.

Careful! Don’t leave bags unattended on the beach because pickpockets have a field day during San Juan.

There’s also a free electronic music party at Parc del Fòrum that has free entry till 3 am.

You’ll be happy to know the metro runs all night.

Motorsport lovers! June in Barcelona is home to a classic MotoGP event at Montmelò.

This year’s version runs from June 5th to June 7th and tickets start at €29.50 each. The track itself is found about 25 km northeast from the city but you can easily get there via car, train, or bus.

The best vistas for the race are found in the Stadium Area; for more 2020 Catalunya MotoGP ticket information check out the official MotoGP website.

For those looking for something romantic during their Barcelona holiday I suggest checking out the Magic Nights concert series on the dragon-back roof of the epic Casa Batllo.

With entrance you’ll get art, live music from any of a number of eclectic bands, and two drinks.

Make sure you keep checking their website for 2020 Magic Night information.

Concerts in Barcelona in June 2020

You can’t really go wrong with the classic Festival Jardins Pedralbes. This multi-night festival of individual concerts at the gorgeous Palau Reial has been running strong for 6 years.

Some highlights for June 2020 include James Blunt, Madness, Patti Smith, and more.

Summer in Barcelona means the inevitable arrival of the festes populars (‘neighbourhood parties’).

In June you’ll find the festivities kicked off in the picturesque Born neighbourhood; here you can see many Catalan culture staples like the correfoc (a type of parade with fire-breathing dragons), the dancing giants, and a whole bunch of concerts in the area’s beautiful squares.

The Festa Major Casc Antic is the place to go and runs June 21st to July 1st.

As far as what to do in Barcelona in June what’s more summery than a good old football match?

Sports fans looking to take in a match at the legendary Camp Nou football stadium have found their event: usually during June Barcelona hosts an epic charity match with ex players from another European team.

Harass Me in the Comments Below

I plan on adding to this list of events in Barcelona in June as we get closer to the time – if I’ve missed anything though make sure to keep me in check by writing in the comments below.

And as always, if you’re having troubles planning make sure you ask me about Barcelona holiday! No question too dumb 😉